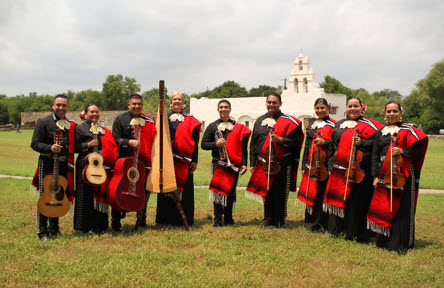 one of the five UNESCO world heritage sites in San Antonio.

Mariachi goes back hundreds of years.  Most of the sound we hear today is from the 19th century.  Mariachi Los Soberanos consists of young, talented individuals with years of experience in the music industry, performing arts, and public relations. Each member has played for over seven years, and contributes their musical knowledge achieved from performing with other groups and studying with different masters in this area. From the European influence of the violins, trumpets and a classical guitar to the rustic hybrid adaptation of the vihuela and guitarrón from classical versions of the guitar and bass, Mariachi Los Soberanos offers the whole instrumental gamma of resonance variety in modern mariachis.

Jonathan Wei, the founder and director of The Telling Project, is a playwright, writer and producer. Jonathan’s dramatic work has been staged at the Guthrie Theater, Library of Congress; Maryland Center for the Performing arts; The Alley Theater in Houston, Texas; and Portland Centre Stage in Portland, Oregon among others.  His fiction and nonfiction have appeared in the Village Voice, Iowa Review, and the North American Review and Glimmer Train, and his work featured by the New York Times, Washington Post, Baltimore Sun, Inside Higher Ed, the Associated Press, and National Public Radio.  He has received support from the Bob Woodruff Foundation, National Endowment for the Arts, the Smithsonian Institute, the Library of Congress, Metabolic Studios, Minnesota Humanities Center, Humanities Iowa, Oregon Humanities Center and others.  Jonathan lives with his family in Austin, Texas.

The Telling Project began with Jonathan Wei working with a veteran’s student discussion group in order to help them have meaningful conversations about their experiences. This discussion has led to a national performing arts non-profit that employs theater to deepen our understanding of the military and veterans’ experience. Greater understanding fosters receptivity, easing veterans’ transitions back to civil society, and allowing communities to benefit from the skills and experience they bring with them. Through this understanding, a community deepens its connection to its veterans, itself, and its place in the nation and the world.

Since 2008, The Telling Project has produced 40+ original performances, put over 180 veterans and family members on stage and performed in 16 states across the nation.  The cast members are all local veterans where the production is being presented. So far productions have been in Washington DC, Baltimore, New York, Houston, San Francisco, Minneapolis, Denver, Austin, San Antonio, Tampa Bay, San Antonio and many other locations plus more are scheduled.

Jonathan will be involving five veterans from the local San Antonio cast in his presentation.

The Telling Project will soon be launching a new forum for veterans to tell their stories. It is called “Planting the Oar.” 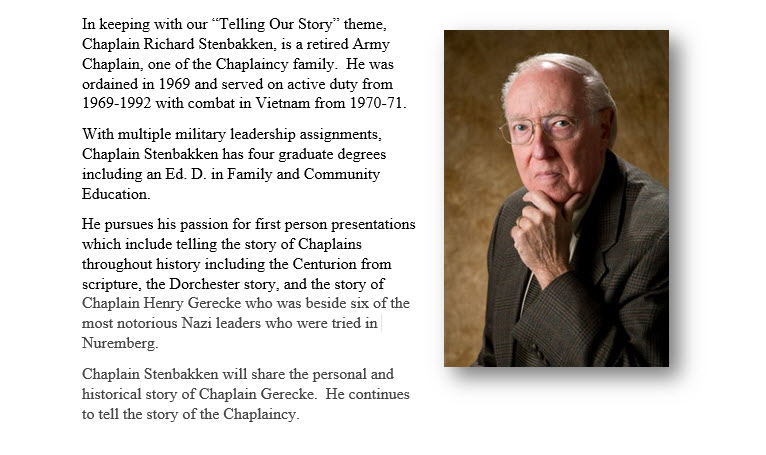 For Spouses of Deceased Members

For Spouses of Deceased Members:

The U. S. Army Chaplaincy Corps Regimental Association is made up of all members of the Chaplaincy Family and their Spouses.  We know that this is a very sad time for many Spouses and Families of our members’ who lost their loved ones since the last Reunion.   We are reminded at every Reunion Memorial Service as each name is read followed by the sound of the ringing bell and Taps that we have lost one more faithful member.  Together we gather to honor their memory and their service every two years.

There are several things we would like you to know:

Finally, to all USACCRA members:

If you know of any Chaplain, Chaplain Assistant, Chaplaincy Civilians, or Spouse that may have passed away since the last Reunion, please let us know.  We do our best to collect those names but must depend on all our members to help us.

Register by Mail for Reunion

Register by Mail for Reunion

Print the forms below:

Register for the Reunion Gathering in three easy steps

“Register for the Reunion Gathering in three steps”

Register for the Reunion, meals, tours:

Are you getting excited about the upcoming 8th Biennial Regimental Reunion San Antonio, 26-29 October?  Besides an interesting program guided by our “Telling Your Story” them, this reunion will offer lots of opportunities to join your friends and see some of the area in and around San Antonio.  We want to help you make your decisions.  Below are links to some of the tours we will be offering.  You might find it helpful to check out some of these videos.

San Antonio including the Main Plaza and the beautiful King William district: 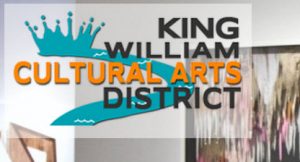 Fredericksburg and the Hill Country:

After Hours Tour of The Alamo:

Be looking for the registration links about to be listed on the internet.

You may or may not realize that San Antonio has five beloved Spanish Missions which date back to the 1700’s.  Last summer they finally received the world-wide recognition that they deserve.  The missions of San Antonio were in scripted as a UNESCO World Heritage Site.  Our international visitors have increased exponentially.  I am attaching a link to the missions.

We will be staying in the historic Menger Hotel which is literally next door to The Alamo.  If you would like to have more information on The Menger, here is a link: http://www.mengerhotel.com/ 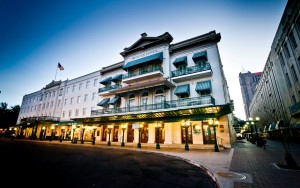 I’m getting excited, are you?