Scottie Lloyd served for over 30 years, Active and Reserve, with the Army as an infantry officer and primarily as a chaplain (1975-2012). Overseas he served in Germany Korea, Haiti, Kuwait, and on special assignment to a variety of places in the Middle East. His last position was as the Director of Personnel and Ecclesiastical Relations for the Army Chief of Chaplains retiring in May 2012.

He possesses a bachelor’s degree in journalism from the University of Missouri School of Journalism, a Master of Divinity degree from Christ Seminary-Seminex, a graduate of the USA Command and General Staff School, a Masters in Strategic Studies from the United States Army War College, is a graduate of the Army Clinical Pastoral Education program (4 units), and is nearly finished with a Certificate in Archaeological Excavation from Palomar College (San Marcos).

He is endorsed by the Evangelical Lutheran Church of America. Scottie is married to Karen (Anders) Lloyd with two sons and two grandchildren. Scottie serves in a variety of organizations both locally and nationally primarily supporting military veterans and the poor. 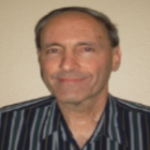