Friday, 25 January 2019 was the “kick-off” meeting of the Washington DC-area Chaplain Corps network of chaplains, chaplain assistants (RAS), DREs, DA Civilians and spouses.  Central to our start was gathering in prayer, led by David Hicks.  Our agenda was to enjoy the friendship and connections together.  There is a definite “afterglow” from the November 2018 USACCRA 9th Biennial Chaplain Corps Family Reunion.  Many words of thanks were expressed for the National leadership and the satisfaction of teamwork to celebrate chaplain ministries and communities.

Pictured are:  (seated) Connie and Wayne Ice with Wayne, Jr., Carolyn and BenChuck Manning, Bill Jokela and Randell Bowen, (standing) Paula and Eric Wester, David and Janice HIcks, Gary Dahl, Ben and Betty Nass, Renee Kilsh, Wayne Lehrer, Phyllis and Jack Marcom and Susan Dahl.  We got regrets from Jeff and Monika Young, Otto Reinbacher, Bruce Burslie, Jane Heaton, Bob Chance, Dennis Madtes and Doug Lee (with late-breaking cancellations). Of course, Donna Weddle is on her “western decampment” based in the Phoenix area for the winter and fostering gatherings there.  Our Washington DC gathering was a time of celebration and gratitude.

Looking ahead, the group determined to set the next meeting for Tuesday, 30 April at the Patton Club, Fort Myer, Virginia, gathering at 11:45 am for a 11:55 am kick-off.  Also, looking toward the future, by acclamation the group determined that Chaplain Wayne Lehrer would join SGM Susan Dahl and Chaplain Donna Weddle as the DC-area planning team.  This was prompted by Chaplain Eric and Paula Wester who bade farewell as Eric retires from active ministry as an ecclesiastical endorser.  In February, they move to Jacksonville, Florida. 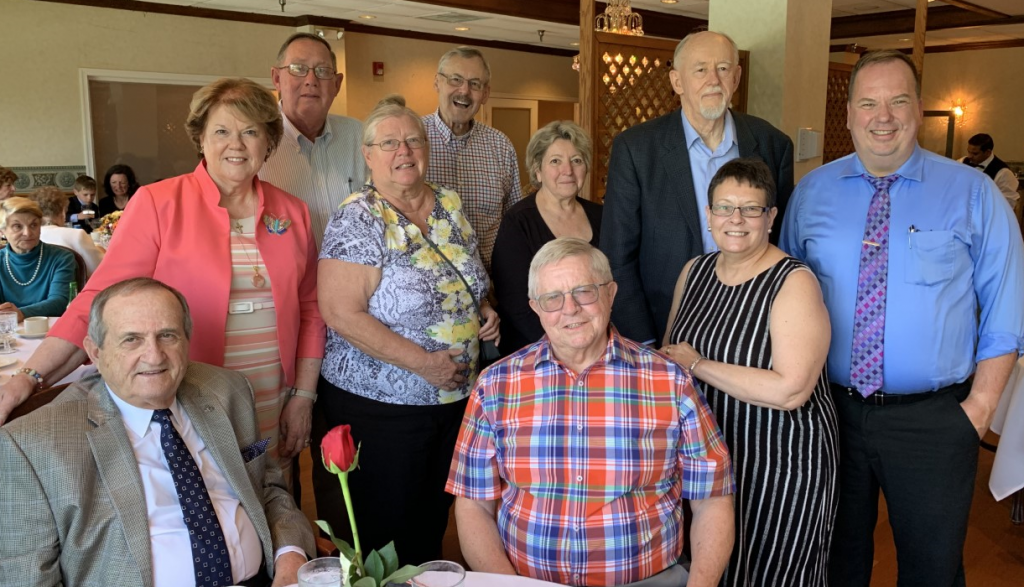 Greetings to all of you,

Fife and Drum Dining Room at Ft Myer (1145).  Ten of us were able to be together

Among the items discussed were:

> which day of the week is best for our gatherings.   We decided to move them

to Thursday for the near future.

>  How often should we gather?  Quarterly, as we do now, or more often?  We

decided that should be at the next gathering.

>  What, besides gathering for lunch, are we prepared to do at our gatherings?

Example:  Go to Gettysburg and ask Ch Hicks to share their city.

The MDW Chaplains were also meeting at this same time, and we secured information

Chaplain Hill, followed by a cake cutting, and lunch at the Chapel.   Please put our

corp anniversary on your calendars.