Many of us have our own memories of G.T. and I hope that we will all value and share those memories with each other and with the chaplains coming into the Corps. G.T. served in many very significant and important positions in the Army, including being our Chief. He always was a leader and his voice was a valued one in the meeting of the senior chaplains. He knew the importance of these fora in the leadership of the Corps. He kept these meeting going when he became Chief and used the senior leaders of the Corps to form a vision of the Chaplain Family.

The Chaplains Corps has come through some important milestones during his career. The Chaplains Corps helped the Army recover from the war in Vietnam to become the finest Armed Force in the world. We have been there to help the Army in our engagements in Afghanistan and Iraq and we were with them in combat and in returning from deployments. We have seen our existence challenged and have worked through some internal crises like prayer and homosexuality. G.T. had a leadership role in all of these and more. In it all, he had concern for the chaplain family and doing things to strengthen our bonds together.

The one thing that I remember most about G.T. was his desire to help young chaplains by setting up mentoring programs for them. This was the biggest sense of calling as he approached retirement. I remember his getting a contract to set up a mentoring program for the Chaplain Candidates. He and Hugh Dukes worked hard to make this program work. G.T. gave the clarion call to the retired community to use their experience to make the Candidate ready and more competent upon entry into the Service. Hugh managed the program and G.T. was indebted to Hugh for his work and dedication to helping G.T. realize his dream. I remember being able to mentor Candidates from my denomination and others is the Michigan area. I still keep in communication with several of these. G.T. was thankful to all who became mentors.

Then we all were impressed and thankful for the first Chaplain Reunion and the work John Scott and his team did in organizing that event. G.T. wanted to keep that reunion and to expand it to include the entire Army Chaplain Family to keep it healthy, courageous and spiritually fit. This year, we will celebrate our 8th Biannual Chaplain Family Reunion in San Antonio, TX. The planning effort for this reunion is being led by a retired DRE, Kim Casey. G.T. was very happy about that. He was always filled with ideas for the reunion and worked hard to make them successful.

The mechanism that was put in place to coordinate all of these efforts was the United States Army Chaplain Corps Regimental Association. G.T. led a group of Chaplains to bring about the birth of this organization. He expanded the vision of the USACCRA to include all active and retired Chaplains, Chaplain Assistants, the Reserve components, the Directors of Religious Education, the widows and widowers and the civilians who worked to support the chaplains. Each year USACCRA has become better organized and better in communicating with the chaplains’ family. G.T. was always generous with his advice to the President and the Board. We all were aware of his dedication because he showed up at our meetings even when it was an effort to do so. He was living out his calling to continue to serve God and the chaplaincy.

He never stopped his concern for mentoring and the C2C program was his latest planning in this long list of efforts. The OP TEMPO of the Army in the past few years makes mentoring difficult, but G.T. did not give up and continued to coordinate with the Chief of Chaplains to keep mentoring alive in the Branch.

I think that the greatest gift we could give to G.T. is to continue all our efforts to make the chaplain family strong and to help young chaplains succeed in the Corps so that we can best serve the Army God has called us to serve in ministry. We all say, “Thank You, G.T. for the love you showed our Chaplain Family.” 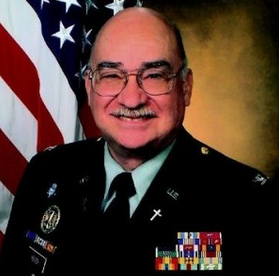