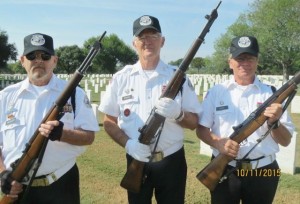 Sergeants Major Retired, David Klass, Bill Neuiszer and Ron Bowren all live in San Antonio, Texas and volunteer one day a week at the Fort Sam Houston National Cemetery.  They serve with the Military Service Detachment Honors Team as a rifleman, which renders military honors to veterans of all branches of service.  Two active duty service members begin the service by holding the U.S. Flag over the casket  while members of the Detachment fire three volleys of rifle fire and play taps.  After taps, the flag is presented to the next of kin family member and the honors team renders present arms.  A different team of volunteers  serve each day of the week.

Ron Bowren retired in 1994 from USARPAC Headquarters in Hawii.

Each on of these NCO’s also serve on the San Antonio Local Chapter Committee of the U.S. Army 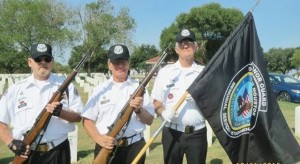