November is a time for remembering…and this year memories run deep.  With the discordant sounds of horror piercing streets in Beruit, Paris and elsewhere and the treasured memories of Veterans as battle buddies and friends

Our network of chaplaincy personnel in the greater Washington DC area gathered on the cusp of Veterans Day at the Fort Myer Officers’ Club (10 Nov) for prayer, lunch and conversation.  Attached is a photo of our group and once again, David and Janice Hicks were recognized for having traveled the furthest….down from Gettysburg, PA.  Others present were Wayne Lerher, Donna Weddle, Eric Wester, Ben and Betty Nass, Susan and Gary Dahl.  We also remembered in conversation and intercession a number who could not be with us for the November meeting:

Jan Heaton on another mission at Fort Belvoir 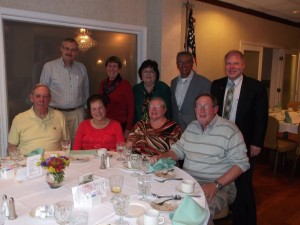 Wayne Lerher mentioned the upcoming 25th reunion of his Desert Storm unit which deployed for combat operations.  They will meet at Ft Myer with a chapel service in Memorial Chapel.  Also, we looked ahead to 2016 and planned future gatherings with dates and locations.  Each meeting convenes just before 1200 noon for prayer followed by lunch and conversation.  We dismiss at 1300.  All chaplaincy personnel close enough to travel to Ft Myer or Ft Belvoir are urged to join us!  Dates and locations for 2016 are: 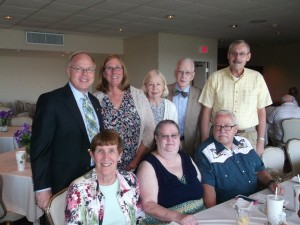 At Fort Belvoir we gathered a portion of our DC chapter of the US Army Chaplain Corps Regimental Association.  Attending and pictured here are Donna Weddle, Connie and Wayne Ice, (back row) Eric and Paula Wester, Phyllis and Jack Marcom and Wayne Lehrer.  Also stopping by (but not pictured) were Jane Heaton and Chaplain Craig and Connie Pasche.   It was great to welcome several folks back from Arizona and recent trips to San Antonio, Texas.  And for those who stayed in the local area, we had marvelous reports about prolific vegetable gardens…indeed, “…the earth has brought forth its increase!”

We had several messages of regret from those unable to attend, mostly due to travel:  Gary and Susan Dahl, David and Janice Hicks, Chaplains Bart Physioc, Matt Woodbery, Jeff and Monika Young, Robert Chance, Doug Lee, Renee Klish, Ed Brandt and Benchuck Manning.   We do have one lesson learned – continue to emphasize the location in email updates.  We received emails after our meeting Ben and Betty Nass and Bill Jokela waited in vain at the Ft Myer Officers’ Club for the main body of our group….which had gathered overlooking the Potomac River at Ft Belvoir.  A few others had made tentative reservations but were unable to attend:  Ron and Jonda Crews, and Chaplains Karen Meeker and Lucy Der-Garabedian.