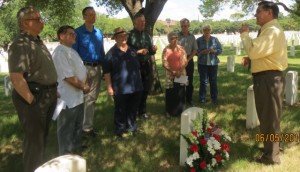 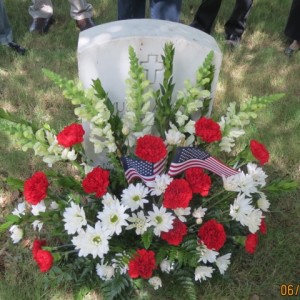 Here is an activity that was done here in San Antonio by our Chapter in June.  This was the first annual ceremony honoring the deceased Chaplains and Chaplain Assistants resting at Fort Sam. who served under the US Army Chaplaincy Corps.  Those in charge of the ceremony  hope to generate more interest for next year’s ceremony.  They will select one Chaplain each year to honor with a decoration of flowers.  One exciting thing happened:  The small tape recorder failed as we were about to sing the National Anthem.  We sang it anyway. Then, Mr. Ed Manning, the Casualty Section Manager for Fort Sam said that he wanted to sing Taps.  It was a magnificent and amazing performance with a powerful voice that could be heard throughout the area near by the carrillon.  This was an emotional and unforgettable rendition of Taps. 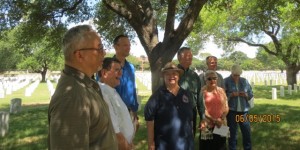