Kim Casey, a native Texan, is a retired Army Director of Religious Education. She worked alongside Army Chaplains and Chaplain Assistants for more than thirty five years. She served as a Protestant Religious Education Specialist in Fort Knox, Kentucky. From there 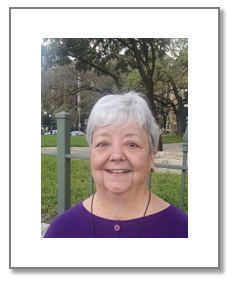 she worked with all faiths in to U. S. Army Garrisons in Stuttgart, Germany; Frankfurt, Germany; Fort Rucker, Alabama; Heidelberg, Germany; IMCOM West Region, Fort Sam Houston, Texas, and IMCOM HQs also on Fort Sam Houston, Texas. She retired from federal service on March 2, 2011 (Texas Independence Day).Kim was confirmed as an Episcopalian in 2008 and is on the Altar Guild at St. Mark’s Episcopal Church, San Antonio, Texas.
Currently Kim is a certified Professional Tour Guide in San Antonio, Texas and is the volunteer Education Director for that organization. She is also employed part time by The Alamo as a history interpreter.