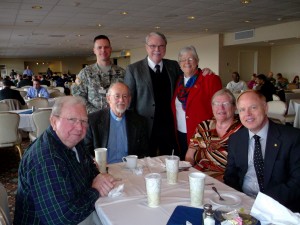 Metro DC-area Chapter Gathering – “Neither cold nor snow nor predictions of blizzards….”

The local chaplain corps regimental association group gathered on Tuesday, 27 January at the Fort Belvoir Officers’ Club overlooking the Potomac River. While neighbors to the north and east endured a blizzard (and many of our number sent regrets from Arizona, Florida and even New Zealand), we celebrated friendships and memories around a luncheon social.

This was a particularly notable gathering for two of our number: Gary and Susan Dahl observed Gary’s last day of work after a career of service to our Nation. Two days later, they began a long-planned return trip to Hawai’i to get their retirement life off to a great start. 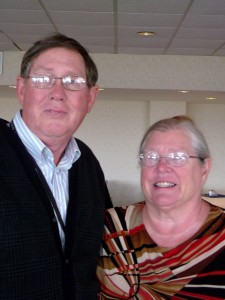 Also joining us was Chaplain Jason Nobles, part of an inter-agency (DoD and VA) and interdisciplinary approach in clinical care (social work and chaplaincy). He works full-time in the pastoral department of the new Fort Belvoir Community Hospital.

Our next Metro DC-area Chapter gathering is set for lunch on Tuesday, 12 May at Fort Myer.